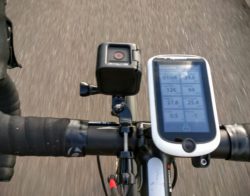 I almost succeeded in buying a GoPro the day before the London Revolution event. But I failed due to the unavailability of the handlebar mount in the local Argos.

But the market research had been done and the decision fell on the GoPro Hero 4 Session. Smaller than the normal GoPro and less advanced and thus also less expensive (half the price; 220 EUR); bought it on Tuesday at Coolblue and got it delivered yesterday; and ready for a test on my evening ride today.

I used the timelapse mode with a 10 seconds interval; for a ride of 2 hours 15 minutes this resulted in 812 photos. A small selection (unedited photos) can be found in the slideshow below. All in all nice results 🙂

Creating the timelapse playback (with GoPro Studio) I choose to reduce it to 25% of the normal speed.

END_OF_DOCUMENT_TOKEN_TO_BE_REPLACED 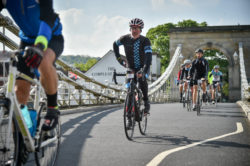 After a not so nice night in a cold tent and a lot of car noise, the brave men and women were getting up at 5 in the morning …

I was a little less brave and took breakfast around 6:30. A tasty English breakfast buffet with coffee and orange juice: it compensated well for the too few hours of sleep.

Weather forecast: less wind and coming from a nicer direction (West) and higher temperatures (around 16 °C): time for lighter clothing, my Cronos (my employer) livery. 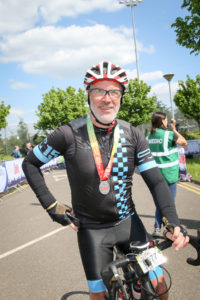 On the menu today: 140 km from Ascot back to North London (Lee Valley Athletics, Edmonton) and crossing the Thames at the lovely city of Marlow.

I was a bit afraid of riding another 140 km after the 160 of yesterday. But, surprisingly it went better than the day before. The protein recovery drink apparently did its job; back wind in the first quarter and riding in little groups certainly also helped. In a first group I even met some fellow countrymen!

The first 100 km consisted of mostly quiet roads, beautiful nature and some lovely cities. Car drivers were sometimes not very cautious and impatient.

And faster than expected we reached the vicinities of London, – not unexpectedly – a bit too busy and with heavy traffic.

With a feeling of “is-it-finished already” we arrived back at Lee Valley Athletics: lots of cheers of supporters and volunteers and as ultimate reward a medal ;-).

END_OF_DOCUMENT_TOKEN_TO_BE_REPLACED 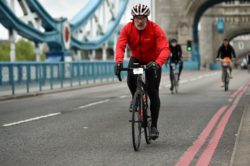 Planning my trip to the Adobe Summit in London I stumbled upon a cyclo sportive event taking place the weekend of 14-15 May: Dulux Trade London Revolution.

A two day event with about 1500-2000 participants: starting in the north of London, through the center (and over the Tower Bridge) to arrive in Ascot (yes, the racecourse) after a 100 mile ride through the beautiful country side south of London; quite challenging due to the distance, but also due to the frequent climbs.

Always nice to ride in dry conditions; wind coming from the North and fairly cold: wearing winter clothes was the correct choice! Riding through London went rather smoothly due to the early hour and the rest of the trajectory consisted mainly of fairly calm roads.

The event was very well organized with nice pit stops, transport of the luggage to the Ascot base camp, enough showers and toilets, nice meal. 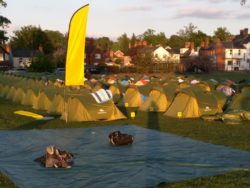 Also a quite impressive look: the hundreds of tents spread out over the huge Ascot terrain.
Sleeping in a tent of course was a huge success (not! and cold!).

The riders participating were very diverse; but the average participant was British, male (surprise) and mainly middle-aged and riding in groups.

I’m a solo rider, but now and than being able to “slip stream” was very much welcome.